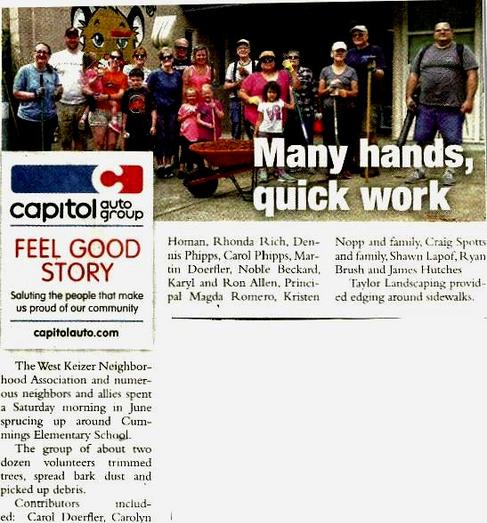 In the past the WKNA has participated in the quarterly Adopt-a-Streeet clean-up on Chemawa Rd. from River Rd. to Keizer Rapids Park.

Keizer's Wallace House Park is a site of historical interest. In the summer of 1812, a fur-trapping party from the American Fur Co.'s Ft. Astoria built a cabin on the bank of the Willamette River here in order to trade with the local Kalapuya band. It was the first such structure in the Willamette Valley. Visit the park today to view the interpretive kiosk and step back in time.

The West Keizer Neighborhood Association joined the celebration of the 200th anniversary of Wallace House held at Wallace House Park on June 9, 2012.​​

On June 23rd the WKNA, along with members of the Cummings PTC, Staff, new Principle Magda Romeros and family, neighbors, and the Chamber's Men of Action in Keizer (MAK) set about to tidy up our little neighborhood school. The MAK men attacked the bark dust piles with a vengeance, while the rest of us edged, pulled weeds, swept the porch and sidewalks, while others swept the sides of the school and windows free of cobwebs (a big THANK YOU to Taylors Landscaping)! It was a fun morning eating donuts and meeting new neighbors. Thanks to all of you who came to brighten up our sweet little School.

Last but not least!!! A huge shout out to Rhonda Rich, who coordinated this event! It wouldn't have happened without her !!!

The Club will be holding Monster Cookie, Half-Cookie and Mini-Cookie bicycle rides on August 29, 2021. Rides are staggered starting at Keizer Rapid Park (KRP). Detailed information and registration forms can be found on their website. Pre-registration deadline is August 23rd. 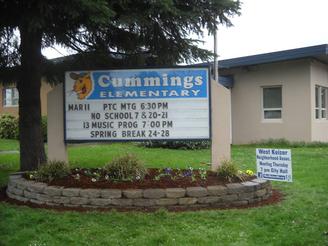 ​NEWSLETTER: Check here whenever you'd like to catch up with the news of the neighborhood. Our newsletter is a relatively new addition to our site. We hope it will help our neighbors stay updated on important issues. ​There are many projects and/or events, both new and ongoing, that are supported and/or spearheaded by the WKNA. We are also involved in other activities that benefit our area. Here's a list of what we're involved in currently.

A settlement was reached in September 2019 in the case brought by a Keizer family whose home was pierced by a stray bullet fired from a Polk County rock quarry. The incident occurred in June 2018 when a rifle bullet shattered a granite backsplash in the home of Tom and Sheryl Bauer, the bullet landing on the counter near where Mrs. Bauer was standing.

Recreational shooting at the rock quarry on River Bend Road NW had occurred for years. West Keizer neighbors had complained before about the noise and reports of stray bullets had been shared many times, including a 2017 incident at Sunset Park.

The Bauers sued quarry owner Lance Davis Jr. later in 2018 and secured a restraining order curtailing shooting at the rock quarry until the lawsuit could be settled. The judgment handed down in September 2019 in Marion County Circuit Court ordered Davis to limit the “shooting of firearms, except in self defense,” to shotguns alone.

The Bauers' attorney Mark Hoyt said his clients “filed suit to end the threat of stray bullets from the property killing or injuring Keizer residents. The judgment entered does that by limiting shooting on the property to shotguns.”

After the Sunset Park incident, West Keizer Neighborhood Association representatives and concerned West Keizer neighbors testified at numerous Keizer City Council meetings about the threat posed by ongoing shooting from the quarry. They also testified at Polk County Commission meetings and Marion County Commission to keep attention on the issue. The City of Keizer ultimately joined the Bauers' case as an intervenor. The goal was protection of residents, city employees and city-owned and controlled property from “dangerous and unreasonable risk,” according to City Attorney Shannon Johnson. Shooting at the quarry subjected a large part of Keizer to potential risk, he said.

The issue also rose to legislative attention with two bills introduced in the 2019 session aimed at extending liability for the quarry to be used as shooting range. Both bills died in committee.

(Content derived from a September 20, 2019, story in the Statesman Journal by Whitney Woodworth)

In 2011, faced with a dilapidated and increasingly dangerous play structure at Willamette Manor city park, the WKNA took on the project to replace it. With the Keizer Parks Foundation, a private non-profit, WKNA lobbied the Parks Advisory Board and City Council to place the play structure first on their priority funding list. With a generous donation from Highway Fuel Company, it worked. Dedication  and celebration of the structure was June 25, 2014.

Every spring, the WKNA spruces up the reader board for Cummings Elementary with flowers often supplied by Egan Gardens. This year, we hope to expand our efforts to include the cement planters by the front and gym doors. 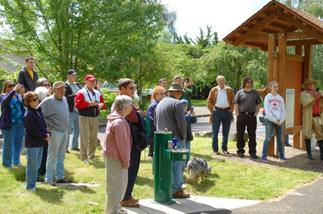 The celebration featured history re-enactors from Silverton who pitched a camp much like what the Wallace party would have had before erecting the cabin that became Wallace House, the first such permanent (although inhabited for less than two years) structure in the Willamette Valley.

The celebration topped off with generous helpings of cornbread and chili.

The West Keizer neighborhood covers a large area: from Chemawa Rd. on the north to Stark St (city limits) on the south and River Rd on the east to the Willamette River on the west. There are approximately 3,100 households and, as of August 2011, there were only ten (10) Neighborhood Watch captains in this area.

Neighborhood Watch is one of the most effective and cost-efficient crime-prevention programs in the country. Burglary, auto theft, theft from vehicles, and vandalism are the most prevalent neighborhood crimes. But when those who would commit such crimes have reason to believe that they will be observed...well what do you know? They decide to try somewhere else!

Neighborhood Watch  is not a vigilante or "nosy neighbor" type program. It is about neighbors caring about neighbors and is sanctioned by the Keizer Police Department. Lt. Andrew Copeland is the contact person at the KPD.

Inform the KPD when you plan to be gone for an extended period of time, as on a vacation. Vacation Notification formsare available at the KPD and online at the Department's web site. Officers will have access to the form in the event that there is a problem at your residence. Finally, always be alert to who and what is going on in your neighborhood so you can report any suspicious activity to the KPD.

So, get involved! After all, it's your neighborhood! You can take these steps to make it a safer place to live. Is it worth the very small investment? Definitely!

The WKNA sponsored 2 donation food barrels during the 2019 Christmas season. These barrels were dedicated to the the Keizer Community Food Bank ( KCFB) and, thanks to our community's donations, we were able to provide them with 198 pounds of food.

The barrels had been loaned to WKNA by MarionPolk Food Share. Encouraged by the generosity of our neighbors and Keizer residents and the on-going need at the KCFB, the WKNA purchased 2 of their own barrels which you will see at local businesses throughout the coming year.

We would like to thank Dennis Blackman and staff at Copper Creek for allowing us to leave a barrel at their location during Christmas and in the future. Our other barrel will travel between businesses along River Road.

​Delight Street Improvement, 2014-2019:
​The WKNA has been working with the City for the past 5 years to have a pathway and/or sidewalks constructed along Delight St. from the Cummings Elementary gym, where the current sidewalk ends, north to Chemawa Rd.  We have met multiple times with the City of Keizer Public Works Department and the Traffic Safety Bike/Pedestrian Committee, including site visits and walkabouts, to keep this project on track in spite of delayed funding on several occasions.

At last, funding was approved in the City of Keizer Budget FY 2019/2020 for a walking path from Chemawa Rd. to Dearborn Avenue. Coincidentally, a school bond measure was passed (FY 2019/2020) which allocates monies for improvements to Cummings Elementary, including a sidewalk from the gym north to Dearborn Avenue.

It finally appears Delight St. from Cummings Lane to Chemawa Rd. will become a much safer walk to school for the students of McNary High School and Cummings Elementary!

Last but not least, a big “Thank You” to all who came together, went to meetings, wrote letters, and took time to attend the site visits and walkabouts:

Without all of us coming together and making sure we were heard, most certainly this would never have happened.